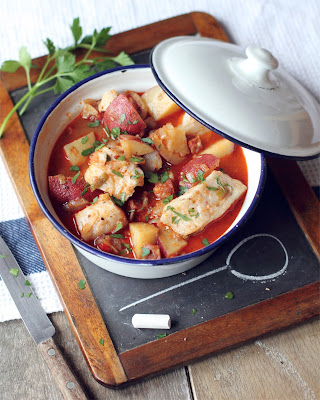 Circa 1987, having a food-based forename lent itself to some pretty

"Yeah? Well, why don't you make a stew, cook it in an oven, then

eat it in your den? With some art".

Or words to such effect. Even at the time it was amusing in it's absence of bite;

This week it's all about fish stew; complete with art (primitive chalk spoon),

the stairs. I lied about the stairs bit.

pan on the hob before stirring in the chorizo; then add the onion, thyme and bay.

Sauté everything for 5-10 minutes on a medium heat. Tip in the potatoes,

sprinkle with paprika, then add the tomatoes and stock. Simmer for about

10 minutes until the liquid has reduced slightly, and the potatoes are nearly done.

Pour everything into an oven-proof dish, then carefully stir in the fish. Put the lid on

and pop into the oven for 10 minutes. Serve with a sprinkling of chopped parsley